Lots of teachers, lots of books, now there’s teachers being cooks! Barbecue, that is!

Navarre High School is located on the Gulf Coast between Ft. Walton Beach and Pensacola Florida. This is an unusual high school with two Lang 84 smoker cookers. No, the Lang 84s aren’t there to teach cooking classes, they are a huge part of a fund-raising program for the Navarre High School Raiders Band. Dean Barrow, the Band Director provided us with a few interesting insights.

Lang: How did you go about creating a fund-raising program using BBQ?

DB: When I started teaching in 2004, I already owned a Lang 60 Deluxe. I had been doing some catering and decided that I wanted to try it at concessions on Friday night. The BBQ was a hit and I’ve been doing it for 17 falls now.

Lang: How did people at the school react?

DB: One of the coolest parts of this is the number of students and parents who have fallen in love with cooking as well. They start out helping with the barbeque food prep and in no time, they were tending the fires, and basically running it. They learn the value of working well for something bigger than themselves. All I have to do is sit back and eat great BBQ!

Lang: One of the interview questions we always ask is what drove you to start this business?

DB: Of course, this isn’t a business in the technical sense, it’s a high school. I love to cook, I used to BBQ with my dad growing up. Whole Hogs, Butts, Steaks, etc.

In my role as a band director, I needed a good way to make money for the program that the kids and parents could be involved in. I also needed it to have maximum income potential. Cookie dough, candy bars, and candles are fine, but you make very little money on them. Selling BBQ is the way to go. 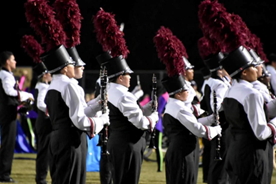 Lang: So, it sounds like BBQ has been part of your life?

DB: Yes, I grew up in a barbequing family.

Lang: Who works with you on this program?

DB: I have a band booster organization with tons of great people to work with. There are many jobs and quite a few gravitate to our BBQ grill team. We have three large barbeque sales a year, plus we cook at the 5-9 home games a year. Volunteers make all the difference for these kids.

Lang: What makes your program unique?

DB: I think what makes us unique is that we really aren’t a business. We are a team of volunteer parents that want to provide our student members with the very best opportunity for success. Operating a band is an expensive activity, and many families can’t afford all that it requires. Five years ago, it cost an average of $475 per student to be a member in the band. This year, our students had no band dues. That is totally because of our booster’s efforts and their BBQ concessions. 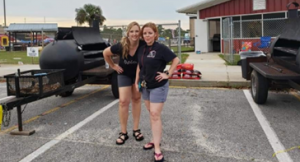 Lang: What else is involved?

DB: In addition to a few local festivals a year, we focus on two pork plate sales. One in the fall and one in the Spring. Our goal is to sell 10 plates per student. That works out to between 1,000-1,300 plates. We give the students roughly 3 weeks to sell their tickets. Then, we have a one-day sale/pick-up. Luckily, we have a very good reputation in the area. So, the tickets sell quickly. Some say, we have the best BBQ in the area. We also sell BBQ wings, pulled pork and PP Nachos at home games. We run two full line concession stands as well. 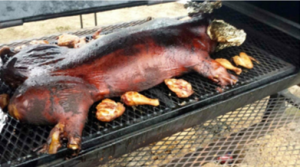 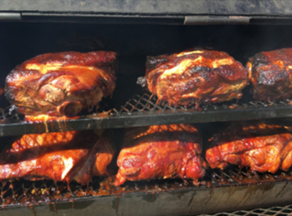 Lang: That must keep everyone busy.

DB: There’s more, during the month of April, we have a concession stand at the Seabreeze Jazz Festival in Panama City Beach. There are roughly 7,500 people there every day. We sell pulled pork, turkey legs, sausage dogs, grilled wings and other items.

Lang: What were the pitfalls you didn’t expect when you got into this?

DB: There really haven’t been any pitfalls for us. I guess I have learned two things when it comes to making money. First, sell tickets in advance. That way, there’s no capital outlay and, if the person forgets to come pick up their BBQ, you’re not out any money and nothing goes to waste. Secondly, selling plates makes a lot more money than selling whole butts. 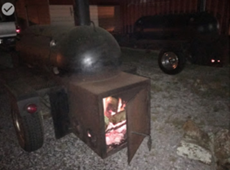 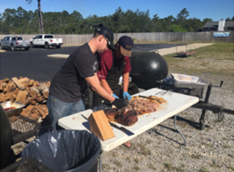 Lang: When did you first purchase a Lang?

DB: I first visited the Lang welding shop when I taught a band camp in Nahunta. The band director, Scott Bozeman, took me there because he had a piece of an instrument cart that was broken and needed it welded back together. Ben was actually working on a grill that day and I knew I had to have one. It took me until 2003 before I bought my first grill and I loved it. I bought my second, a long neck 84 deluxe with Chargrill in 2006. We run two Lang 84s at the school.

DB:  I like the consistent heat, the build quality, and the flavor you get from a reverse flow. That concept, reverse flow is just an amazing innovation.

Lang: What is your main goal as a BBQ cook?

DB: As a cook, my main goals is no leftovers. It makes me proud when people are lined up a hundred deep to get our BBQ on Friday nights. When you see barbeque business owners standing in line or they come to the cooker to talk BBQ, and tell you how much they like it, it’s really a high-level compliment. 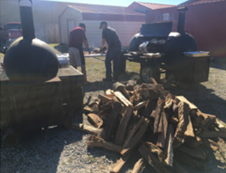 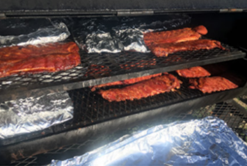 Lang: What are the favorite meals you like to prepare?

DB: Only with ourselves. We try to be better each time we fire up our Langs.

Lang: What projects are you currently working on?

DB:  We are currently planning our spring plate sale and jazz fest concessions.

DB: Well, if you look on social media, you can get a real mixed signal about the BBQ community. It ranges from helpful, supportive, to downright ugly. I don’t fool with that aspect too much. I have had a few people that I’ve gone to for advice over the years. Especially, when it came to cooking for large numbers. 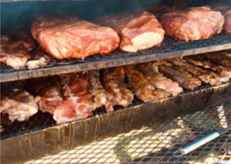 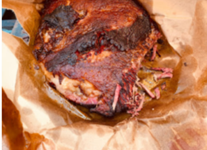 DB:  Ya know, there are a thousand recipes and ways to cook BBQ. I guess the one thing that I learned was to keep it simple. Take my rub for instance. When I first started out, I spent hundreds of dollars trying to develop my own rub. I even used one very notable BBQer’s rub who would give it to me in 5-gallon buckets.

It was good, but didn’t always agree with everyone’s stomach, if you know what I mean. Well, one afternoon, I just happened to try mixing Lawry’s Seasoned Salt and brown sugar together. I made it a little more salty than sweet, and it was a hit. We’ve been using it now for almost 18 years and don’t plan on changing.

The moral of the story: Don’t ever box a Lang Smoker Cooker into typical restaurant business settings alone. There’s a lot to “learn” with Lang in a variety of markets out there. “And the band played on…” in large part due to Lang smoker cookers and a very forward thinking band director.